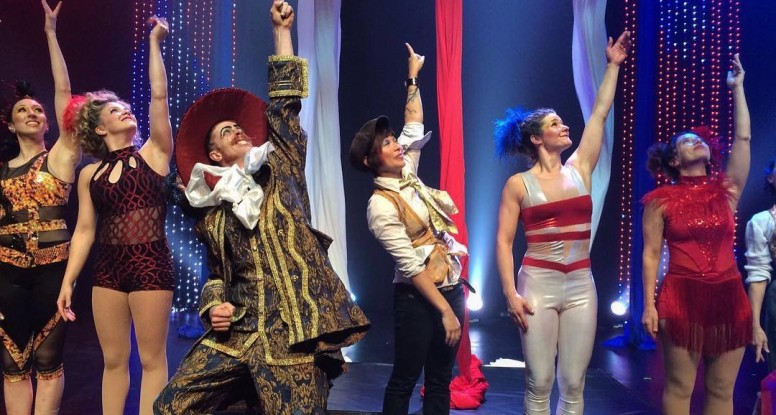 From the Bottom Rung to the Top and Back Again

I have been incredibly lucky over the last half year to be a part of two projects that have tested and stretched my range as a performer to opposite ends of the spectrum. At the end of last year from September to December I got the opportunity to be a part of the creation and performance of Salvage with Kinetic Arts Productions where I portrayed Mutton, the lowest status clown in a circus infused post apocalyptic parallel universe. 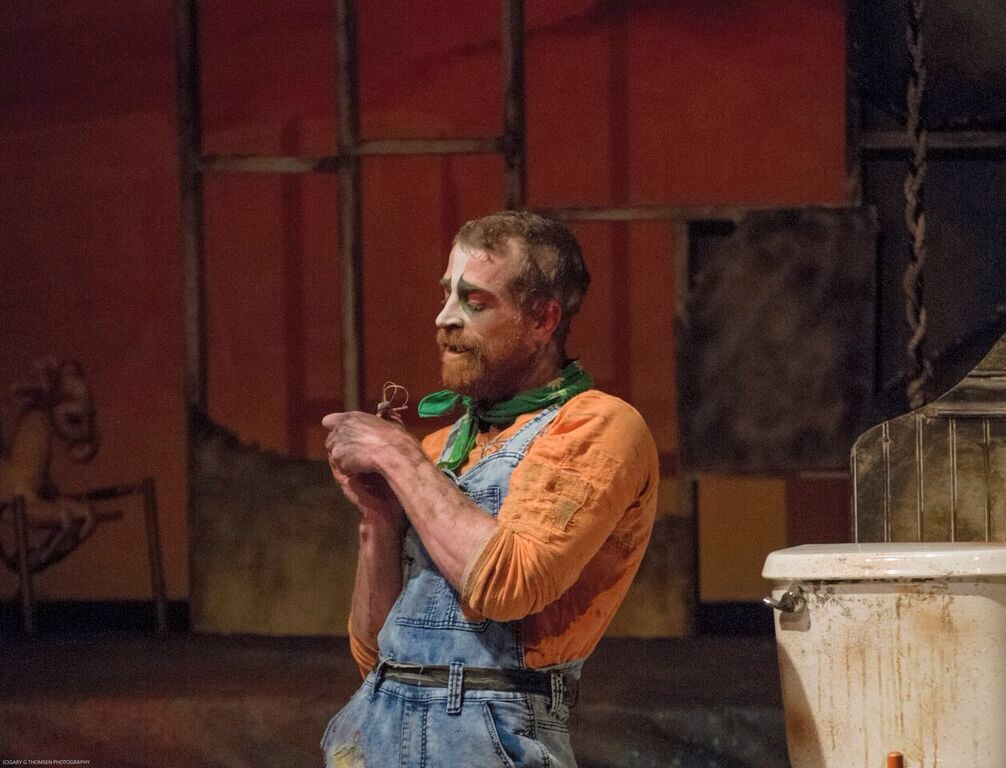 Mutton plays with his food … a cockroach in Salvage with Kinetic Arts Productions. Photo by Gary Thomsen.

Then, for a workshop week in January, and two weeks of rehearsal and performance in March of 2016, I have been a part of the creation and performance (we closed last night) of Panache with Firefly Theatre and Circus, where I portrayed His Excellency, the Earl of the Dukedom of Glorious Magnificence, and Viscount Baron of Marquis de la Cite – the beloved, the revered, the luminous … Ponce de Ponce de Panache. As his title suggests this character was the highest of high status in an alternate circus infused universe that was a combination of King Louis XIV’s reign, Hunger Games and a Donald Trump rally. In true Trumptastic fashion, my character – The Ponce – was an ambitious, uncompromising political provacateur who wasn’t daunted by saying whatever caused the tinderbox to combust. Such fun territory to sink my bouffon teeth into. 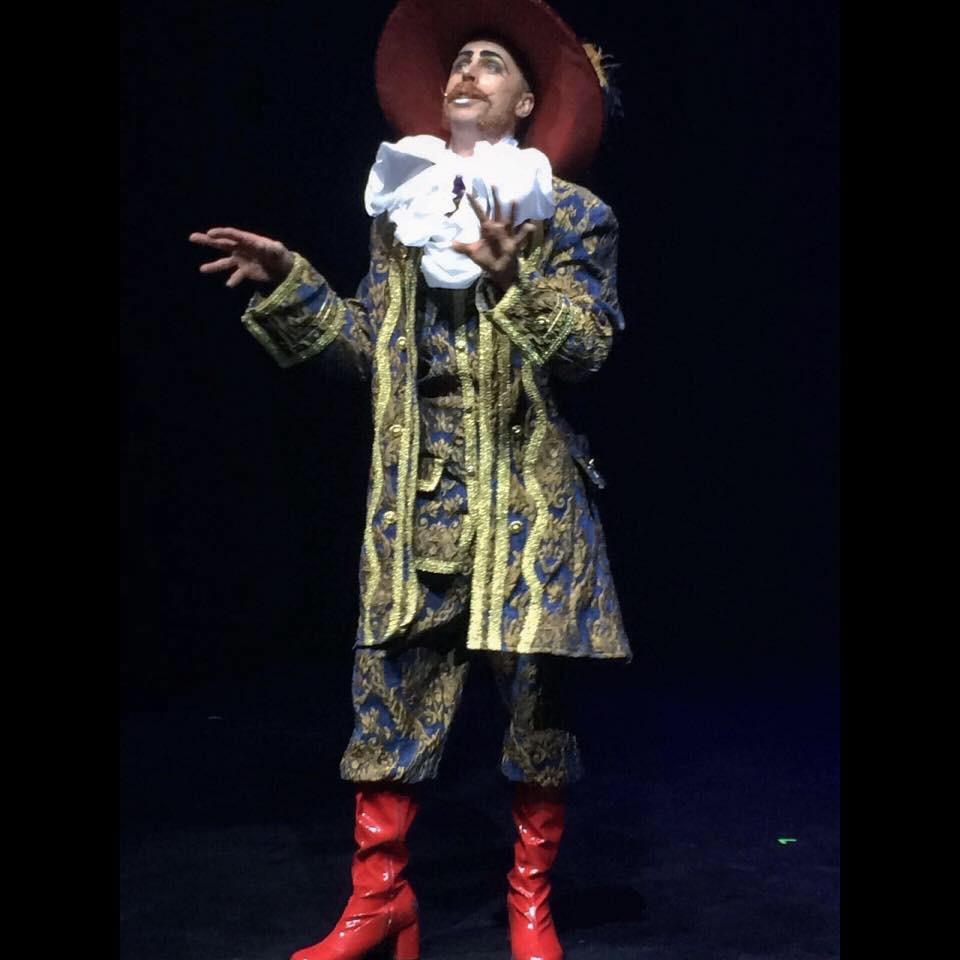 His Excellency, the Earl of the Dukedom of Glorious Magnificence, and Viscount Baron of Marquis de la Cite – the beloved, the revered, the luminous … Ponce de Ponce de Panache sermonizes in Panache with Firefly Theatre and Circus.

I feel so lucky to have had the opportunity within such a short amount of time to play two characters at such opposite ends of the status spectrum. I’m grateful to Jaron Hollander and the folks at Kinetic Arts as well as Annie Dugan and those at Firefly Theatre and Circus for seeing the skills in me to create and convince the audience of such drastically different character types. It hasn’t always been in my career that folks would take these risks and leaps of faith in my abilities to be transformative as a performer and give me such meaty roles to dig into. Now I’m looking forward to seeing, what extended character will I get to bite into next?! Oh wait, it’s Charles the Chimp in the remounting of The Greatest Monkey Show On Earth in April at Kinetic Arts in Oakland, but more on that later! 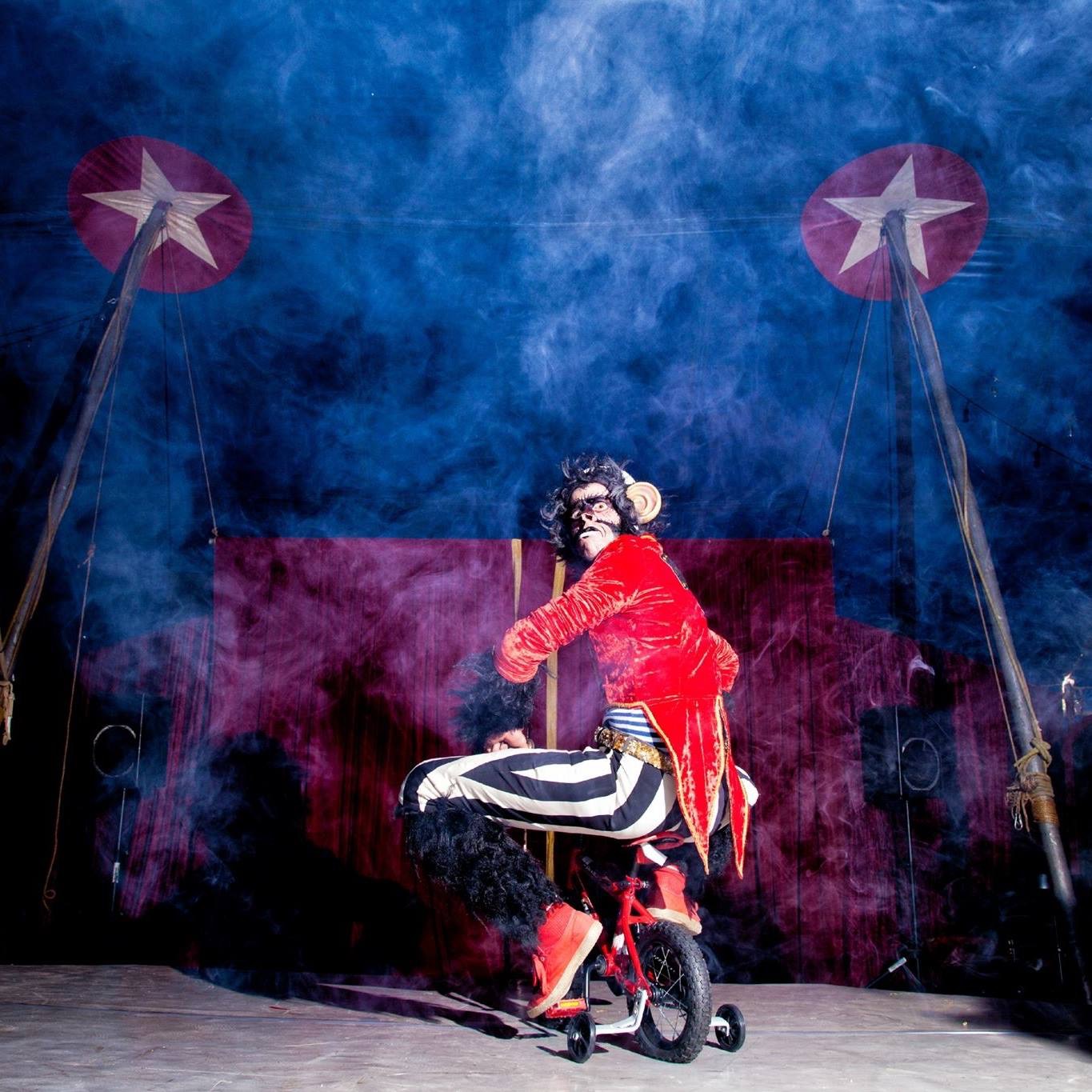 Charles the Chimp in The Greatest Monkey Show On Earth coming soon to Kinetic Arts in Oakland. Photo by Kristina Lapinsky.